Dean Vegas – One of the world’s top tribute shows, look-a-likes and impersonators of Elvis Presley. A superb entertainer for cabaret, clubs, conference after dinner entertainment, personal appearances at your company awards nights, trade shows, private or corporate functions and events.

Dean Vegas returned home from Canada to a hero’s welcome with media and fans everywhere. They had all come to see the World’s No. 1 Elvis Tribute Artist awarded at the Annual Collingswood Elvis Festival, the biggest of its kind outside the USA. He was also awarded the prestigious “E Award” which is nominated by all other Tribute artists to the person who best depicts Elvis.

A great achievement for an Australian.

Dean Vegas was also presented the Queensland Clubs’ Award for Best Show of the Year. Dean has also taken out Best Australian Tribute Artist  at the Wintersun Rock’N’Roll Tribute awards.

Dean has performed internationally, wowing audiences with his Tribute to Elvis spectacular. Throughout this energized ‘Vegas style’ show, audiences not only share the hits from Elvis’ amazing career, but experience the passion and warming personality of a truly great performer. Dean continues to break house attendance records night after night as his popularity grows at an astonishing rate.

Over the past few years, Dean has performed in Las Vegas, Canada, Lebanon, Memphis, Bali, Indonesia and Tonga. He has appeared in television commercials across Australia, including the Rock Building Society in Rockhampton, Brisbane Extra, Bronco’s Football Club & Telstra.com to name just a few.

Most recently he starred in the Franklin’s Big Fresh commercial aired throughout the eastern states. He has been an invited guest on numerous primetime Television & Radio shows all over Australia & abroad.

During Dean’s tour through the US in August last year, he was invited to audition and succeeded in being the first Aussie to co-host  of the new Pop across America show, launched on television throughout the US.

The ceremony includes 2 songs, one to start (eg – Love Me Tender, Can’t Help Falling In Love, or Wonder of You) and one more upbeat song to finish. This is performed in the famous white Elvis Jump suit.

The Wedding Vows are based around the Elvis songs and makes for an unforgettable (and totally legal) event… it’s a wedding that family & friends will be talking about for years to come.

Sadly we no longer have the opportunity to see the real Elvis. Dean Vegas is the closest you will ever get! 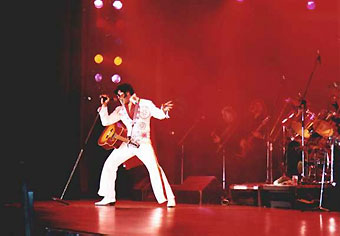 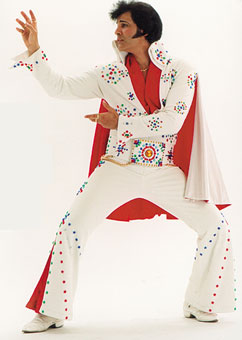 Play Video
"Hi Dean, l saw your show and it blew me away! Your eyes are beautiful, as l told you that night. You have reminded me what true performance is and l look forward to seeing your again! Thankyou for opening your heart and giving all that you have, it has inspired me to sing again and make the audience feel the way you made me feel...Love You xoxox"
Tina Cardinale
"Thanks for the memories on Saturday Night at QPAC what a wonderful Tribute you paid to Elvis. It was a night everyone that attended will never forget. Tears were flowing. Keep up the great work we need you & rely on the best. Go for it Champ."
The Pink & Black Social Club Inc.
"I can honestly say that I was not only impressed with your show, but, it was nice to see an Elvis impersonator, who didn't try to act like he was Elvis himself out there... watching you perform brought back a lot of great memories of the man himself. A job well done and the best I've seen."
Russell Norris
"Dean performed at the Elvis Festival in Morpeth January 2002. it was the 1st time that the people in the Hunter Valley Area has ever seen Dean perform. He was mind blowing in his performance. Nothing was a problem for Dean. His personality and his gift of being around the fans was unbelievable. He was a hit, and on January 11-2003 he is returning to Maitland Town Hall where the show is a complete SELLOUT."
Mark Conway
"Dean! We met you at Graceland and when our band Jungle Room was playing at Elvis Presley's Club on Beale St. last year you came in and stopped the show. You are a super guy and we're glad to see you are still TCB, With much love from Memphis, TN"
Jungle Room band
"Accompanied my mother & her friends to your show only so not to disappoint her but am I glad I did!!! Had a wonderful nite and enjoyed it immensely. I'll certainly be accompanying her to the next one, this time because I want to!!!!Hopefully in not to distant future. Great show, Great Voice, Great moves, Great interaction..."
Toni - Hervey Bay
Facebook-square Instagram Youtube Twitter Vimeo